In our home, we had a “word of the day” which stayed the same for about a year with my eldest kiddo. The word was paleontologist and she picked it up at her sitters house when she was just 2. Since then, she has said she wants to be a chiropractor, a midwife, a barista, and still a paleontologist after 2 years later. She even says that she wants to work with me some day. Her father and I have always told her that she is totally capable of doing all of that, however, it’s going to be a lot of hard work. I also remind her that she should find something that she’s passionate about when she’s ready to really think about her career. She never seems to mind those reminders.

Then, we went to a spring fair for kids a few months ago and there was a woman who was representing the Mammoth Site where they do digs every day throughout the summer for kids. We decided that this was going to be on our list of to-dos for the summer!

I signed her up for Friday last week and we all hopped in the van with our lunches and headed toward the dig site. We got there with some time to spare so we played around in the gift shop and the “Kids Cave” and then there was an announcement that the little diggers were about to head out to look for mammoth bones! After the kids (probably about 15 kids) got their name tags on, we walked to the dig site and got to learn a little bit about fossils and the proper way to dig them up. For example, do you know the difference between an archeologist and a paleontologist? Archeologists may dig up anything that is connected in some way with humans and a paleontologist may only dig up things not connected to humans such as animals or plants. 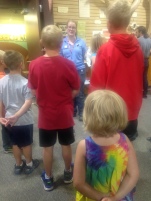 My daughter was the last kiddo to get to her dig spot and she was really into it for about 10 minutes and then she decided she’d rather just play in the soft dirt they were all digging through. She got to a bone and started to expose some of it and then got bored with it so I took over. As I was digging up more of the bone, I heard the instructor say that some paleontologists don’t find anything for years… I was excited about digging up our replica bone and thought that maybe I should have a career change, until I heard that. Seems like it would be a tedious, boring, and frustrating job most of the time. My husband took over after a while and finally, we exposed a rib from a mammoth. Then we took a self-guided tour around the actual dig site before heading back home.

On the ride home, my daughter still says she would like to be a paleontologist, along with the few other careers I mentioned above. We had such a fun time together (okay… there was a little bit of whining from my daughter…) and are looking forward to our next adventure together…